The Siksika band of the Blackfoot Confederacy, are the people for which the confederacy is named. Siksika literally means "Black Foot,” thought to have been called such because of the discoloring of their moccasins by the ashes of prairie fires. The Siksika, like the other Blackfoot tribes were powerful buffalo-hunters. The first arrival of Europeans initially pleased them because of the horses that they brought, which quickly made buffalo-hunting a far easier task. However, this changed when smallpox epidemics ravaged the Blackfoot population in the mid-1800's. Furthering the Blackfoot animosity were the encroachment of white settlers upon their lands and frequent attacks upon their peoples. When the buffalo were gone, the Siksika had not choice but to settle on reservations. Today, the Siksika Nation is in Alberta, Canada about one hour's drive east of the city of Calgary. Their total population is about 4,200. Vintage image restored by Kathy Weiser-Alexander.
No EXIF information is available
Categories & Keywords
Category:Lifestyle and Recreation
Subcategory:Rural Life
Subcategory Detail:
Keywords:blackfeet, blackfoot, download, editorial, edward s curtis, image, indian, life, native american, people, photo, picture, siksika, stock, tipi, vintage
© www.legendsofamerica.com 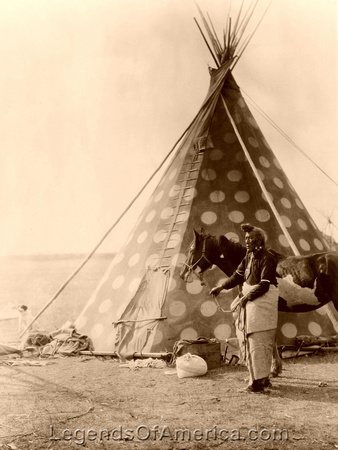