Though the Sioux were primarily known for being great warriors, the family was considered primary in Sioux life, especially children. However, women, too, were highly regarded. Though monogamy was the norm, Sioux men had the ability to take on more than one wife. The roles of men and women were clearly defined, with men expected to provide for and defend the family and the women were to rule the family. These matriarchs controlled domestic life, performing all tasks to make life more comfortable. They worked hard at such tasks as making the teepees, collecting wild berries and plants, making clothing, cooking, and creating magnificent beadwork and quills. When a man married a Sioux woman, it was expected that he would move into her home.
No EXIF information is available
Categories & Keywords
Category:People
Subcategory:Women
Subcategory Detail:
Keywords:download, editorial, girl, image, indian, maiden, native american, photo, picture, print, sioux, stock, vintage
© www.legendsofamerica.com 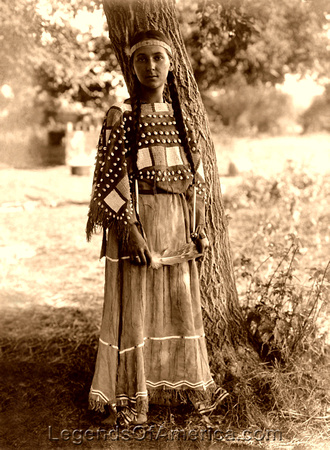