On May 6, 1859, John H. Gregory followed Clear Creek upstream looking for gold. As he pulled a low tree branch out of the way and began to pan the creek, he discovered what was later called the "The Gregory Lode". Located in a gulch between what later became Central City and Black Hawk,Colorado, he staked the first of many mining claims in the vicinity. Immediately prospectors flocked to the region and within two months, the population grew to 10,000 people seeking their fortunes. The Clear Creek Mining District was so rich with ore it became known as the "Richest Square Mile on Earth.”

Black Hawk and Nevadaville got their starts at the same time. Black Hawk is just about 1.5 miles east of Central City. Nevadaville is about four miles to the southwest, following a winding mountain road.
© www.legendsofamerica.com 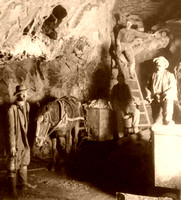