St. Louis, one of the oldest cities in Missouri, began when a man named Pierre Laclede Liguest discovered the perfect place for a trading post on a high bluff of the Mississippi River in 1763. Early the next year, Leclede sent his stepson, along with thirty men, to begin clearing the heavily forested land for a new town, of which Laclede declared, "This settlement will become one of the finest cities in America.”

The first structures included a large house for the fur company’s headquarters, along with cabins and storage sheds. A post house was completed in September, 1764, becoming the focal point of the new village. From here, streets and buildings soon expanded, as trappers and traders populated the settlement.
© www.legendsofamerica.com 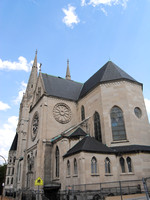